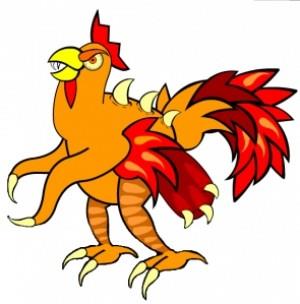 Ce texte de notre ami Ricker WINSOR est publié ici en langue anglaise, c’est-à-dire en langue originale. Nous vous proposerons vendredi prochain sa traduction. Pour l’instant lisez-le tel quel, c’est un bijou ! In Kathmnadu I was dipping into my Nepali chicken curry which comes in a soup bowl with the chicken pieces swimming somewhere in it and as I bit into the first piece a flood of memories came back because this was unmistakably “deshi” chicken, soul-food country chicken. This chicken had had a real life outdoors eating all the unmentionable things chickens eat and running up and down the hills of Nepal. How do I know this? The first sign is that that when you bit down it fights back, like it’s saying, « Not so goddamn fast buddy. You gonna have to BITE  my leg and chew some too. Hope you have some good jaw muscles! » And that made me think of the king of all deshi chickens. We had just moved recently back in time about 100 years from Brooklyn to a little town in New Hampshire where we were sure to find “back in nature” the things we were lacking in New York City. We bought an old house for $11,000 and set about renovating it which we didn’t know how to do. We had a garden and a few chickens. The demolition work-the easy part- had been done on the house so there were no walls, plumbing or electric-nothing but kerosene lamps and a kerosene stove which almost burnt the house down one night-another story. And there were only a few chickens left because raccoons had killed them all. Whatever attempts I made to make the coop raccoon proof came to naught which became obvious usually about 3 am when we would be awakened by a blood curdling shriek of terror and death let out by the latest chicken victim. But they didn’t get “King Kong” as I called him- the biggest baddest rooster you ever saw. I don’t even remember feeding him after a while. We were on his territory and he would charge at you. I would get mad and charge back and he would back down, only at the last second though. Our friend Tom Stambouli was coming up to visit from Brooklyn. I think it was the first time he had been out of Brooklyn. He rarely left the neighborhood we lived in there except to make TV repair calls. That’s what he did for a living but mostly he smoked high-test pot that came in on the Columbian ships that docked at the end of the street and played chess. He taught me how to play. And he did make the long drive and found our house and we showed him around and took him on a tour of the garden and when he was bent over looking at a lettuce plant, all of a sudden from around the corner King Kong came charging and jumped on him, nailing him with his spurs just above the kidneys ! Tom was completely freaked out. In Brooklyn they don’t see chickens except in cleaned parts wrapped in clear plastic. Some little kids think this stuff grows on the shelves of the cooler in the supermarket. What a fright he had and for me it was the last straw. King Kong ran back around the house again and I outfoxed him by going the other way carefully and then making a flying tackle. I got him. Of course he got me plenty too with his beak and talons until I threw my coat over him and with him in the coat I went for my axe. Payback time! I got his head out from the coat on the chopping block where I split wood for the stove and “whack” off came his head. I moved quick to get my coat out of the blood and King Kong took off missing his head but still looking like he had plenty of purpose just to get the hell out of there. I don’t remember if he made it twice around the house before he keeled over but he did finally.  And now we had a chance to have a very authentic « back to nature » moment-eating King Kong ! We got the water hot and did the plucking as best we could. I remember it all took time and we didn’t know much about any of this. By the time King Kong was cooked it was about 10 at night and we were all really hungry. Now we are talking Deshi chicken. I remember that we couldn’t even cut King Kong with a regular knife. And when we did find something that would cut him we couldn’t eat him. He was that tough! Tom said “This is like biting into Sonny Liston’s leg.” For those of you who don’t remember, Sonny Liston was the world heavyweight boxing champ and Cassius Clay- soon to be the” greatest” and change his name to Mohammad Ali- had to fight him to become the world champ. Liston – the “big bar”- was one of the meanest, toughest looking dudes you ever saw and his legs were like what you would see on a rhino! When “the greatest” knocked him out by ”floating like a butterfly and stinging like a bee” and then delivering a perfect punch-one of the greatest ever thrown-it was one of the immortal moments in boxing and in all sport. Anyway, King Kong’s leg was like Sonny Liston’s. King Kong-uneaten-got thrown on the compost heap for the raccoons to wrestle with and we went to bed hungry. All night the you could hear the coons squabbling and it was easy to imagine them saying “where did this fucking thing come from? Either those people can’t cook or this is the chicken from hell !”