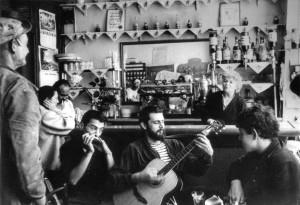 The impulse of humanity is toward freedom. At least that is true in the West where we are brought up on a diet of independence and rugged individualism. When the beats came of age, society post WWII was conformist and materialistic, affluent but boring and facing serious problems such as nuclear destruction, civil rights, and, a bit later, a very destructive and confusing war in Vietnam. In my own case I felt stifled and constricted, unable to breathe in the middle of a comfortable suburban existence. The movie, Rebel Without a Cause , has to be seen as an important moment in the culture. Starring James Dean, Nathalie Wood, and Sal Mineo, it expressed what a whole generation was feeling to some extent or another : alienation, ennui, and angst, in what should have been a perfect world. It is hard to explain that rebellion other than by some need of the human spirit that is not met by the values of Main Street. Are peace and freedom incompatible ? Jack Kerouac, so important to it all, was the closest to normal of the group, if normal can be accepted as a condition. He was Catholic, a fine athlete from the lower middle class, able to go to an Ivy League school, Columbia. And yet he became unglued from that and proclaimed the value of excess, spontaneity, and instability. He was an alcoholic and died an alcoholic. Despite his contribution, he was, for me, the most confused of people, a mystery even to himself. The wild chances the beats took with their lives in terms of sex, drugs, alcohol, and relationships were what they wanted to do and needed to do in order to create some side streets off Main Street. Paul Verlaine and Arthur Rimbaud were precursors. The idea was that it was ok to be wild ; in fact, it was necessary. Following that path, a lot of my generation got washed up on the shore, addicted, disillusioned. The ones, like myself, who didn’t see the beat model as fruitful long-term, turned to nature, a simple life close to the land. A percentage of a whole generation turned their backs on the bright lights of the city and settled in the country, grew gardens, and tried to live the good life as exemplified by Helen and Scott Nearing. Many succeeded and are still there. One of them was the poet David Budbill, RIP, who lived in the Northeast Kingdom of Vermont, and David Kherdian, still writing, now in his eighties. Some of the key people who were associated with the beats but also kept their distance are Lawrence Ferlinghetti, Michael McClure, and Gary Synder. Snyder’s Buddhist practice over years invested him with a sense of peace and concentration that is both active and at rest. Whether he is describing his experience of nature or thinking about the workings of his own mind, his words are fresh and clear, unpretentious and powerful. These three poets are still alive, still healthy, and still producing. Ferlinghetti is well into his nineties and doing just fine. A point of pride for me is that he and I graduated from the same secondary school, Northfield Mount Hermon, in Massachusetts. Not long ago, a friend offered the opportunity to get high again. I said, « I am weird enough without adding to it ». And I think that way about the whole world now. You can fuck a robot if you want, or have your dick turned into a vagina, or cross dress, or die of opioids, or buy cheap heroin, or watch the political people we once respected act like idiot liars. The list of contemporary craziness is endless. The point is this : we don’t have to act out any more in self destructive and irresponsible ways. I quote Gary Snyder from a recent interview. « When Verlaine and Rimbaud were young they were protesting the iron-grip bourgeois rationality had on all aspects of nineteenth-century French culture, the manners, the view of reality, and the exclusion of “the wild” from public life. Rationality in business and society were dominant values. Deranging the senses was one strategy artists like Verlaine and Rimbaud employed to break free of that. Today, the bourgeoisie is sociopathic, overindulged, distracted, spoiled beyond measure, and unable to restrain its gluttony, even in the face of pending planetary destruction. In the face of such a threat, it has, by necessity, become the responsibility of the artist to model health and sanity ». This makes sense to me and so does this by Howard Zinn : « We don’t have to wait for some grand utopian future. The future is an infinite succession of presents, and to live now as we think human beings should live, in defiance of all that is bad around us, is itself a marvelous victory » It does seem heroic to stay steady with enduring values, the kinds that don’t change with the fashions or destroy your body or the people around you. The Dalai Lama said, « My religion is kindness. I don’t need complicated philosophies ». When I think about the beats in contrast to this kind of thinking and I reflect on what I know about their backgrounds, despite their talent, especially in Allen Ginsberg’s case, it is hard not to be confused. Were they truly the spiritual children of Blake, Whitman, and Thoreau ?