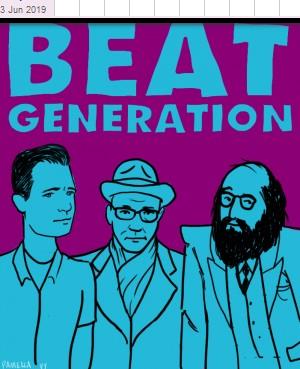 There are strong currents underneath the great flow of history, currents that follow their own direction even as they are carried along. It is the counter culture, going against the flow. I suppose I started early with my questions about it all. I was looking for something beyond the comfortable suburbs of my growing up and was attracted to Greenwich Village and « the beats ». Now, I have taken on, at this late stage, a more concerted study of them. Barry Miles’s biographies of William Burroughs and Allen Ginsberg, each containing about six hundred pages of amazing description and detail provide the information. One wonders how his portraits could be that complete except that both Burroughs and Ginsberg were famous for a long time and both had numerous friends, lovers, situations, teaching gigs, and on and on that gave the biographer rich sources of information. The average Romeo, who might consider himself an athletic, sexy type of guy, might be shocked, pissed off, and disturbed by the wild and crazy sexuality of both these men. Include Neal Cassidy, who could « throw a football seventy yards and masturbate six times a day », and you get the kind of picture that would make the average Romeo look like a boy scout, no a cub scout. About Ginsberg’s sexuality, or Burroughs’s, you can almost smell it. It’s like that. This group remains mythic for a lot of reasons including their talent and the amazing chances they took with their lives with the idea of liberating the psyche and stretching it toward infinity (I guess). That would be the generous way of looking at them. Another way would be to consider them delinquent, dirty bastards with deep psychological issues, the types of people who should be sent by boat to a small island with the job of making big rocks into small rocks. And in the fifties and early sixties « the establishment » overwhelmingly considered them in that way. Allen Ginsberg was twenty years older than I. My older sisters and I were rebels without a cause in the wealthy suburb of Pelham Manor but not more than a half hour fast driving to McDougal and Bleeker Streets in Greenwich Village. Things were going on there we wanted to know about, things that gave us another view of our predictable and comfortable, conformist lives, the ones we were expected to live into the future. « The Times They are a Changin » said Bob Dylan, and a truer lyric was never written. The history of the epoch known as « The Sixties » has been explored in countless ways. It affected everyone and everything in very personal ways. The bigger question for me now is why rebel ? Why do we seem to hate peace ? Because it’s boring ? I wonder about that. The Buddha was a rich kid unaware of anything beyond the luxury of his palace environment. Then he took a trip outside the walls and discovered death, suffering, and misery. The shock of it motivated his quest for ultimate truth. So, for me, in the company of my older sisters, to hear folk singers sing about peace and freedom, to see people with beards sling poetry on street corners and cafes, to be aware of free love and jazz, wow, it kicked me off the straight narrow road of my life and into the wilderness of choice, a world of freedom without a compass. By nineteen sixty-eight I was part of a meditation group that met once a month in lower Manhattan. It was run by a Hindu man named Kumar studying philosophy at Columbia University. Allen Ginsberg joined us for meditation practice there. And I met him again up in New Hampshire and Vermont where he was chanting for peace and playing music with Peter Orlovsky and a guitar player, Steven somebody. Actually, in those days, it seemed like Allen was everywhere, an amazingly public person. I have a project going to create a map of influence, a genealogy of values beyond the status quo and it goes like this in relatively modern times : William Blake, Walt Whitman, Thoreau, Emerson, Auden, Dylan Thomas, E.E. Cummings, W.C. Williams, all precursors to the core beat group : Ginsberg, Burroughs, Kerouac, Cassidy and Corso who, along with many other accomplished poets and artists, created a culture bomb that cracked « the establishment ». When you learn how far they took things, especially in the area of sex and relationships, it is a shock, simple as that. I can only share my confusion. William Burroughs shot his wife Joan during a drunken « game » of William Tell, an expert marksman missing the shot glass on her head from close range by about four inches low. Was it an accident or the « ugly spirit » he talked about ? People sometimes do bad things out of a perverted curiosity. And in Mexico he could get away with it. Burroughs’s wife was not the only one to die. Other people died. In Columbia University days, Lucien Carr stabbed an older guy who was stalking him relentlessly. A woman Cassidy badly used, killed herself. And those are just the ones we know about, the recorded history.  Why were they able to break out of conformity with such wildness ?   ( To be continued )